“This race has consumed me for the past 20 years”

British sailor Alex Thomson is just days away from beginning a sporting challenge widely regarded as one of the toughest in the world today.

The 46-year-old from Gosport, Hampshire will depart on Sunday (8th November) onboard his HUGO BOSS boat from Les Sables-D’Olonne on France’s west coast to begin the Vendée Globe – a 24,000-mile, solo, non-stop, unassisted race around the world.

This will be Thomson’s fifth attempt at conquering what remains the ultimate prize in solo sailing, one which takes place just every four years and has only ever been won by a French skipper. Having finished third in 2012-13 and second in 2016-17, Thomson finds himself one of the favourites heading into the 2020 edition.

Together with 32 other skippers, Thomson will begin the race on Sunday ‘behind closed doors’ after the Vendée Globe’s famous race village - which, every four years attracts some two million visitors - was forced to close amid France’s national COVID-19 confinement measures. Thomson, like his rivals, will have spent the seven days prior to the start of the race in isolation, and will depart dry land on Sunday in the absence of a roaring crowd.

“The race start is going to look very different this time around and I feel very sad that I won’t be able to meet all the fans and wave to the spectators along the canal” said Thomson. “That moment is really something special, the atmosphere is incredible. That being said, this race was made to be consumed digitally so I think this is a real opportunity for us to engage people all over the world via the internet. This sport has so much to offer and it’s our job to tell that story”.

Together with their Technology Partner, Nokia Bell Labs, the British sailing team have installed an array of nine cameras across the HUGO BOSS racing boat, which will enable Thomson to record and stream content for fans even from the middle of the ocean. For the very first time, fans will also be able to view data around the clock, including insight into Thomson’s sleep patterns, activity levels, calories burned and heart rate.

“The pandemic has given us more reason than ever before to use technology to encourage people to follow the race online” he continued. “We’re going to do our very best to make the public feel like they’re onboard HUGO BOSS with me. I’m looking forward to entertaining everyone!” 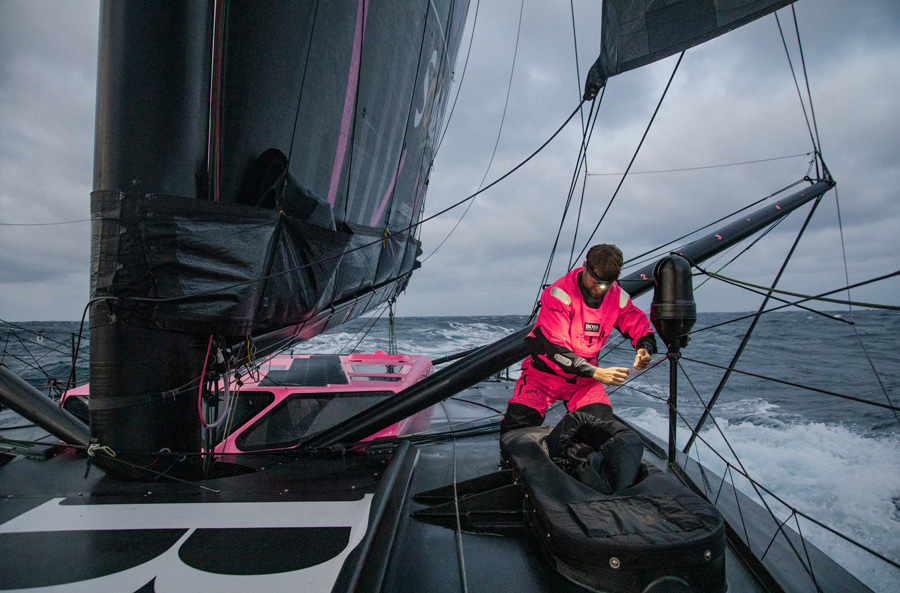 Thomson won the hearts of people around the world in the 2016-17 edition of the Vendée Globe when, after breaking the hydrofoil of his boat just 11 days into the race, he went on to vie for the title, losing out to the winner – Armel Le Cléac'h - by just 24-hours, after 74 days, 19 hours and 35 minutes at sea. This time around, the Brit believes new records will be set:

“These boats are incredibly fast and incredibly physical so I certainly think we could see a winning time well under 70 days. But I’m not going out there hunting for records. It doesn’t matter how long it takes us; what matters is that we finish the race and I think if we can do that, we stand a very good chance of being at the front”.

For the past 17 years, the British sailing team – together with its Title Partner, HUGO BOSS, has set its sights on gold in the Vendée Globe. “Third, second – there’s only really one place to go! So yes of course we want to win it. This race has consumed me for the past 20 years so it’s difficult to put into words what a win would mean. But I won’t allow myself to think about that just yet…”

The Vendée Globe begins on Sunday 8th November. Follow Alex’s progress in the race via The Hub: www.alexthomsonracing.com/the-hub. Here’s what you can expect… https://www.youtube.com/watch?v=sYdPALoyqxg

About the Vendée Globe:
The Vendée Globe is one of the most prestigious events in the sport of sailing. The single-handed, non-stop, unassisted round-the-world yacht race first took place in 1989. Since then, the race – ‘the Everest of sailing’ - has been held every four years and remains the pinnacle event in the offshore sailing calendar.

The challenge sees the world’s most capable and courageous sailors set off alone from the seaside town of Les Sables-d’Olonne in Western France on a climactic journey down The Atlantic, across the Indian and Pacific Oceans before racing back up The Atlantic to return to Les Sables-d’Olonne. While the circumference of the earth is 21,638 miles, in reality most skippers will cover more than 28,000 miles during the race, as they navigate high winds, ferocious waves, unpredictable swells and hazardous ice on their journeys to the finish line.

Since the race’s inception, 167 sailors have attempted to complete it. Only 89 have successfully finished it. And, still to this day, only a French skipper has claimed victory.

On 8th November 2020, 33 sailors will take to the start line in Les Sables d’Olonne to compete in what will be the 9th edition of the Vendée Globe. In what is set to be the most competitive fleet in the race’s history, veterans and debutants, onboard old and new generation boats, will go head to head with only themselves to rely on, both in mind and body.