“Light, sturdy, fast, offshore, self-sufficient, hybrid” was the brief for the uncompromising owner of the latest model Schionning G-Force 2000 Speciale. What resulted is a performance cat that is truly pioneering.

“This boat is the latest and greatest, testament to an Australian boat building industry that is alive and kicking, making hand-crafted, quality boats that are the product of excellent working relationship between client, designer, builder and supplier,” so says the owner of Noosa Marine, Julian Griffiths, who with his team and a reliable network of marine suppliers brought the stunning 19.5m (65ft) Kato to life.

Built as a comfortable family cruising catamaran, Kato was constructed in 14 months.

A two-master, two-ensuite layout with all the comforts of home for extended cruising, the vessel is kitted out with the best of everything, drawing on the superyacht, supermaxi and super-green technology. 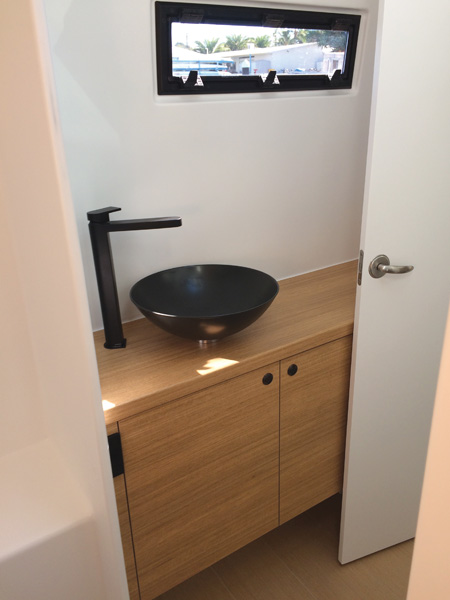 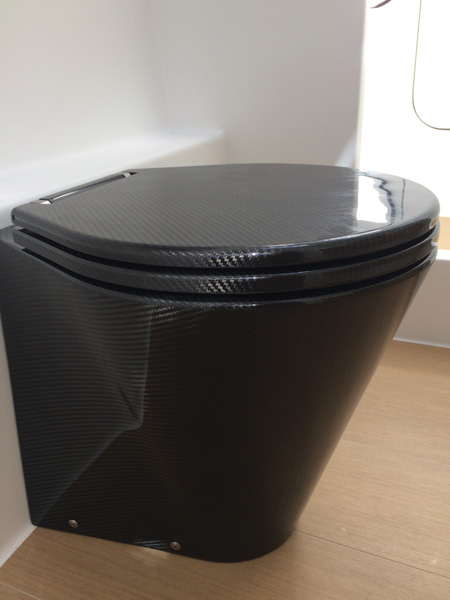 Fitting with the carbon theme, we could not pass up on the huge weight saving of the carbon toilets. 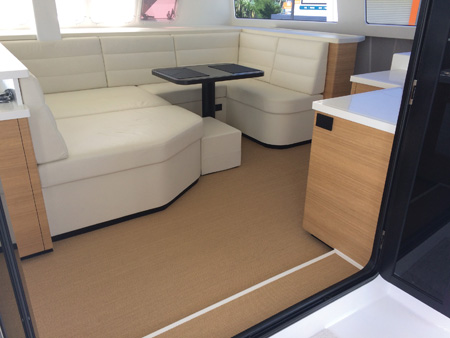 The owner’s aim was to “reduce weight and produce one of the lightest and fastest cruising multihulls on the water”.

Skimming the water around its home port of the Gold Coast, Kato is completely carbon fibre everything – hull, superstructure, furnishings and even the loo.

“Using carbon fibre throughout gives the boat a stiffer, lighter platform, so there’s no deflection in the boat or rig when you’re powering through all conditions,” said Griffiths. “The boat is made to travel worldwide, and it’s fully self-sufficient.”

Lorraine Murray at ATL Composites was involved in the build. “The goal was to keep the boat as light as possible,” she affirmed.

“Hull construction is strip planked with DuraKore which has been standard for the G-Force designs since they were first designed, however, the hulls have been reinforced with carbon fibre rather than standard e-glass to provide extra stiffness and reduce weight for increased performance.”

Other structural components have been supplied as a DuFLEX Composite Component Pack all cored with ProBalsa, which is used extensively in the marine industry worldwide to provide exceptional compressive strength, high thermal and sound insulation and low FST (Fire, Smoke and Toxicity) properties. The DuFLEX panels are laminated with carbon fibre double bias reinforcements for added stiffness.

The interior is also a CNC-routed Component Pack with Featherlight composite panels cored with Divinycell H60, a low density unique combination of polyuren and PVC core that ensures good thermal/acoustic insulation. Laminated with carbon fibre reinforcements, these custom Featherlight panels were specified to provide superior stiffness and again, meet the brief to be ultra-lightweight.

“Manufacturing the interior as a complete component pack allowed the weight to be controlled and the computer-generated routing files allowed for maximum efficiency in nesting and reduced wastage of raw materials.”

A completely carbon-reinforced boat, outside of international racing circles, is unusual, she admitted, “but weight and performance were the criteria for this project, so it was logical”.

ATL Composites was chosen for its processes and quality control.

“Our manufacturing process is unique and quality control measures are taken at every stage of the process,” said Lorraine. “Our Composite Panel Production has DNV-GL Code Approval and ATL Composites has ISO-9001 Quality Management certification ensuring that all our products are produced to the highest standard with complete manufacturing records.”

Kato’s sails and rig were designed in a collaboration between North Sails and Southern Spars. 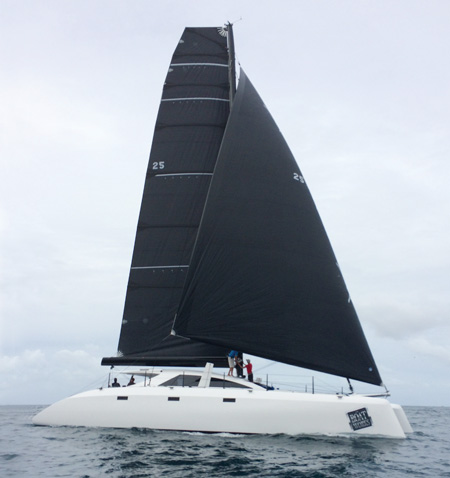 Her first sail showed us all what she can do, easily reaching speeds of 25kts. 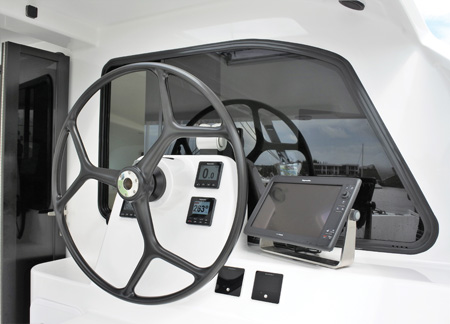 The 23m mast was made in South Africa, while the one-piece molded 3Di sails from North Sails were made of a light-weight pre-preg product used in America’s Cup boats and Formula 1 cars.

Southern Spars and North Sails interfaced with their in-house design software to create the best aerofoil package available for a modern cat.

The in-boom furling system aboard was custom designed and built, making Kato one of the first performance-oriented cruisers to install one. “The square top mainsail will furl into the boom. A lot of design work went into it, while production time was around eight weeks,” said Bradford.

Ian Smith, owner and director Everything Marine at The Boat Works represents Southern Spars Australia-wide. As Smith explains “Furling booms are common on superyachts and this step represents the flow on effect from superyachts. For a cruising yacht, it will improve sail handling without severely compromising performance. It makes single handed sailing much easier.”

While the furling boom is “a touch heavier than a conventional boom”, Smith admitted, “There are no reef lines flapping around, no lazy jacks”.

According to Smith, there are plenty of benefits for larger catamarans to adopt this style of furling boom. “They are becoming more popular worldwide because they make single-handed sailing a breeze and are relatively low maintenance – a great investment.” 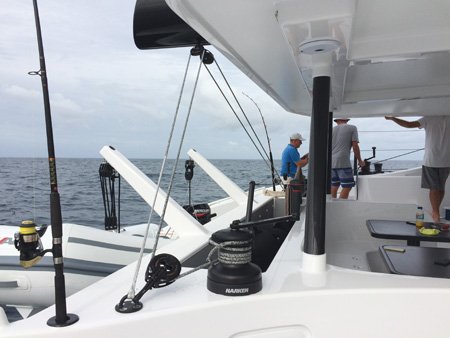 Fully covered cockpit area, protected from the elements, with storage for the stand up paddle boards. 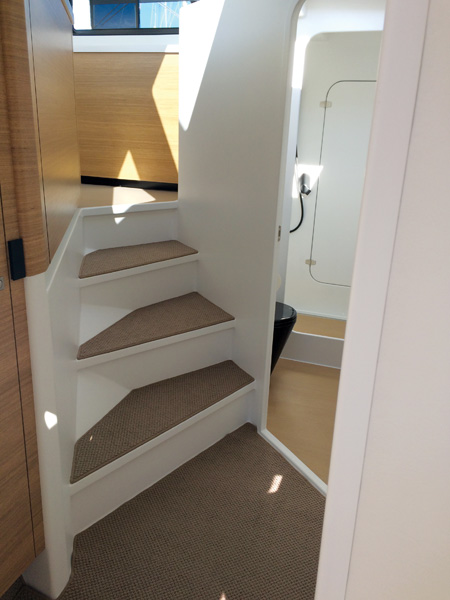 Easy access into the hulls with nice wide steps.

But its green credentials really come into play when it comes to the propulsion. The owner undertook extensive research into hybrid power, scouring the world (via the net) for leading proponents of this emerging technology.

From Finland, the innovative Oceanvolt electric engine, was chosen and installed in the aft utility room. Fifteen Italian-made 110 watt solar panels were installed on the roof above the cockpit.

“The boat runs on solar and through an inverter to the lithium battery, so it should never need to use its auxiliary generator,” said Griffiths.

Australian distributor, Errol Cain of Australian Marine Wholesale is effusive in his praise for the innovative system and believes it truly represents the future of sailing propulsion.

“It uses a lithium battery and can work on its own or in tandem with solar or wind. It’s silent and lightweight, emission-free and low maintenance, creating energy while sailing. It’s absolutely a viable replacement for diesel propulsion.”

“There is a standby generator onboard, for use on a rainy day,” says Griffiths, ironically during the wettest March in 30 years. Speaking after a week of sea trials on the Sunshine Coast, the Noosa Marine team describes the ride as “awesome”.

“The platform felt great. The carbon and the lightness of the rigging, all kept the motion stable. The advantage of the weight reduction using EC6 rigging is very noticeable.

“We topped out at 24kts on its second sail, at gusts between 18 and 20kts. We had to repitch the propellers, we went up 3° in pitch, and that got us up to our desired speed of 10kts and the manufacturer’s RPM.

“We motored to the Gold Coast once the wind died out, under dark rainy skies. We used 3L of fuel per hour at a steady speed of 6kts. With a full crew of nine onboard – including the directors of Southern Spars, North Sails and Everything Marine, we were happy with that.”

As for the anticipated 30kts, the team is confident it will be “quite achievable in the right conditions”.