It fuelled my regatta instinct, I had to turn off the regeneration. Then we had the same speed. Sailing side by side within 10 meters, I added some silent power from the Oceanvolt system, and took off into the horizon with the other captain bewildered and staring at the magic boat!

This testimonial was written by the owner of the electric Beneteau First 47.7.

I am an environmental engineer and the managing director of ETech Miljø, doing business in the field of green energy and climate reductions. A new diesel just felt wrong. I had an electrical VW e-golf with a 24-kWh lithium battery. I looked for electrical propulsion on my boat, I wanted other owners to do the same, and I wanted to produce enough green power to be energy independent. Since there are only a few electric boats in Norway, I wanted a premium product, where the whole systems was well integrated, the suppliers understood sailboats and a company that would pick up the phone also after the sales. The possibility for Oceanvolt to locate potential problems and solve them through the internet appealed to me. It can be frustrating and costly to try to find a service technician if problems should arise. Now I can get help no matter where the boat is in the world, as long as I have internet.

Running an environmental company for 25 years and sailing for 40, I like to use my knowledge of systems to be creative. I wanted the boat to sail well in light winds (14 tons is not easy to move in light winds).

Second, I wanted to motor sail in light conditions. So, I have specified a code sail that should function in regattas, when sailing with the family  and motor sailing.

Third, I wanted to produce enough green energy, so I did not have to constantly look for the  nearest harbour. Not only to power the 12 V systems, but it should be able to charge the motor batteries at least 50 % in 24 hours.

I also wanted increased comfort. We have gone from 1 refrigerator to 2 + a freezer + a hot water heater and all of them are powered by the propulsion battery bank. Still, with all that consumption, the power production is greater than we are able to use.

So far, we have done a bit more than 1000 NM from July until October. The Code sail has made the boat go the same speed as the wind in 2-6 knots. In 4 knots + a little power from the motor, the boat is doing 6 knots. That makes for perfect conditions for family sailing. No waves, just pure joy, silent and comfortable! When the wind pics up, we normally generate 500-1000 W through the propeller, with a max of about 2500 W. When there is no wind at all, and the sun is shining, the boats moves about 3 knots ONLY on the solar panels. So, I can say that the boat is capable of moving, using the wind or the sun. I have 1200 W of solar panels on the deck and 200 W on the sprayhood. 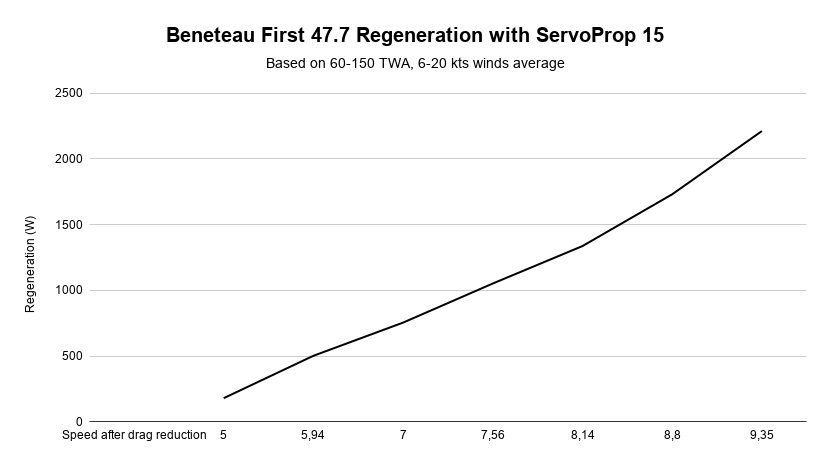 The added power makes the sails have more punch, the boat leans more and old waves don't bother us. The range extension is dependent on many factors when motor sailing. A rough estimate is that motor sailing increases the range by a 100 %. I look forward to more testing, to optimise the combination of light wind sails, motor sailing and large amounts of green energy production.

I think looking at all aspects of the boat, can make electric propulsion an option for many sailboat owners, not only the few enthusiasts. I don't think the only solution is to go for a large battery bank, it will be limited anyway. Slow down, enjoy the moment, and harvest the free energy from the wind and sun. I would recommend electric propulsion to anyone, but you should understand the pros and cons compare to diesel. On a personal note, I have discovered something I did not anticipate when purchasing the systems. When sailing along peacefully and generating power from the prop, another sailboat passed us. It fuelled my regatta instinct, I had to turn off the regeneration. Then we had the same speed. Sailing side by side within 10 meters, I added some silent power from the Oceanvolt system, and took off into the horizon with the other captain bewildered and staring at the magic boat!